Secretary of the Navy Richard V. Spencer said yesterday that the new class of Navy Towing, Salvage, and Rescue vessels on order at Gulf Island Shipyards will be named Navajo. in honor of the major contributions the Navajo people have made to the armed forces.

Gulf Island Shipyards was awarded a $63.5 million contract last year for the detail design and construction of the new T-ATS, which will be based on existing commercial towing offshore vessel designs and will replace the current T-ATF 166 and T-ARS 50 class ships in service with the Military Sealift Command.

“The Navajo people have fought and served our armed forces with honor and valor in nearly every major conflict since the birth of our nation, so it is fitting and right to name a new class of ship in their honor,” said Secretary Spencer. “The Navajo class of Towing, Salvage, and Rescue ships will serve our nation and continue the legacy of the Navajo people, and all Native Americans.”

The T-ATS will serve as open ocean towing vessels and will additionally support salvage operations and submarine rescue missions. The first ship in the class will be built at the company’s shipyard in Houma, La., and is expected to be completed in March 2021.

An artist rendering of the future USNS Navajo (T-TATS 6) 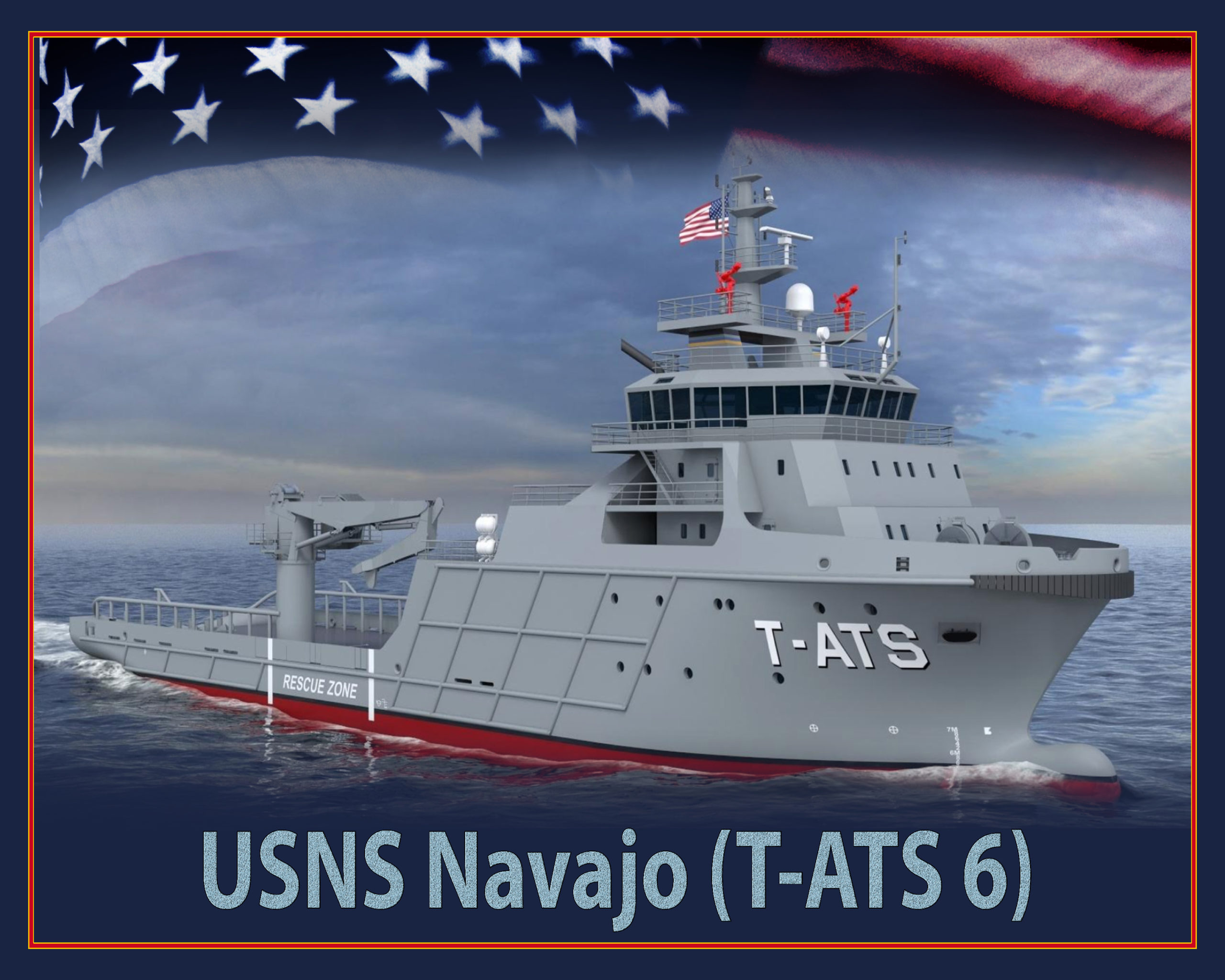 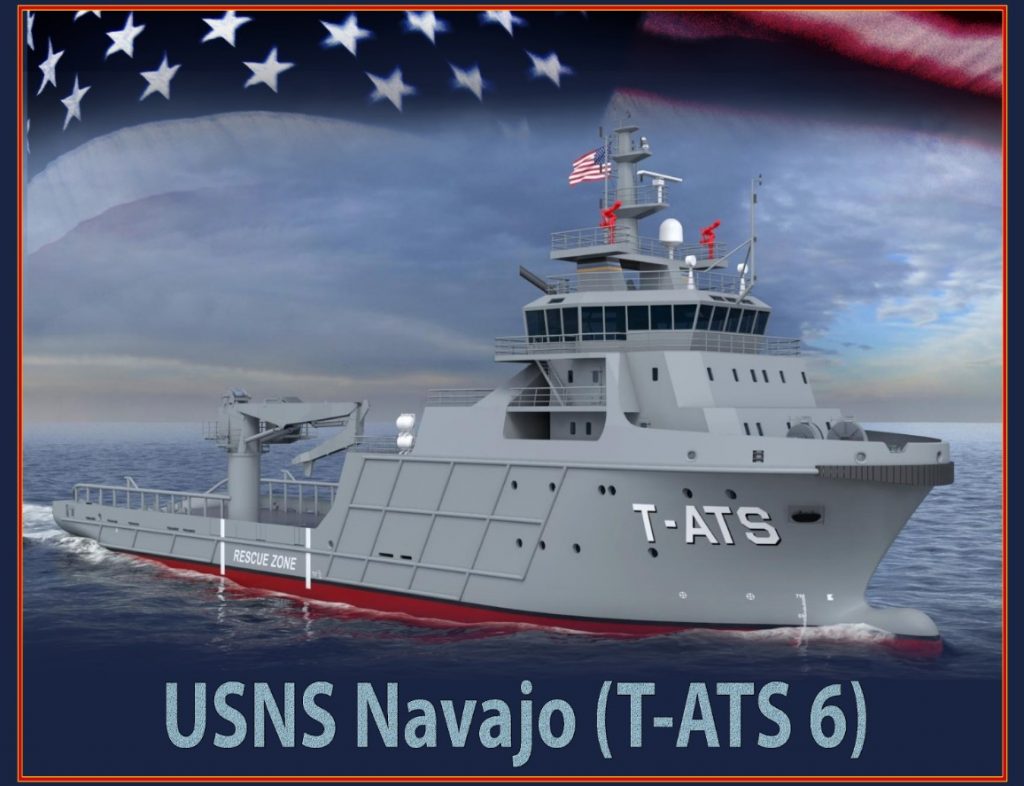 The US Naval Sea Systems Command has awarded Gulf Island Shipyards a $128.5 million contract modification to exercise options for the construction of additional two towing, salvage and rescue ships. These will be the second and third ships in the class which will be known as Navajo-class, in...

Secretary of the Navy Richard V. Spencer has announced the newest towing, salvage and rescue ship will be named Cherokee Nation in honor of the service and contributions the Cherokee people have made to the Navy and Marine Corps team. “It is my privilege to announce that the many Cherokee Nation citizens who’ve served throughout the years will be remembered with the highest honor a Secretary of the Navy can bestow, the naming of a ship,” said Spencer. “The future USNS Cherokee Nation will expand our capabilities and form a critical backbone for the strength and readiness of our entire fleet.” This is the fifth U.S. ship to be named in honor of the Cherokee people. "The Cherokee Nation is extremely honored that the U.S. Navy is recognizing our tribal nation and the generations of Cherokee men and women who have bravely, and humbly sacrificed for our freedom today," Cherokee Nation Principal Chief Bill John Baker said. "Our Cherokee people have contributed in every major battle and war ever fought in this country, and continue to serve in the armed forces in some of the highest rates per ethnicity. Cherokees are a strong, resilient people and we are privileged to have a U.S. ship at sea that reflects both our country and tribe's history and values." Gulf Island Shipyards

Gulf Island Shipyards LLC, Houma, La., has beem awarded a $129,925,080 modification to a previously awarded contract to exercise options for the construction of two additional towing, salvage and rescue ships (T-ATS) and for the performance of unique item identification on the T-ATS 6-class program.

Work is expected to be complete by October 2022. Fiscal 2020 shipbuilding and conversion (Navy) funding in the amount of $129,925,080 will be obligated at time of award and will not expire at the end of the current fiscal year.

Gulf Island Fabrication has been awarded a contract for the construction of two additional Navajo-class towing, salvage and rescue ships (T-ATS) for the US Navy.

This represents the navy’s execution of its fourth and fifth options for Gulf Island’s construction of five T-ATS vessels that will be built in the company’s facility in Houma, Louisiana.

The US Navy has remaining options for three additional vessels.

“We are honored that the navy has exercised the options for two additional vessels. This is great news for our employees in Houma, Louisiana as it will provide additional stability during these uncertain times,” Richard Heo, Gulf Island’s President and Chief Executive Officer, commented.

The Navajo-class will provide ocean-going tug, salvage, and rescue capabilities to support fleet operations. The current capabilities are provided by three T-ATF 166 and two T-ARS 50 class ships, which reach the end of their expected service lives starting in 2020.

Navajo-class ships will be capable of towing US Navy ships and will have 6,000 square feet of deck space for embarked systems. The platform will be 263 feet long, have a beam of 59 feet, and can carry a load of 1,796 tons.